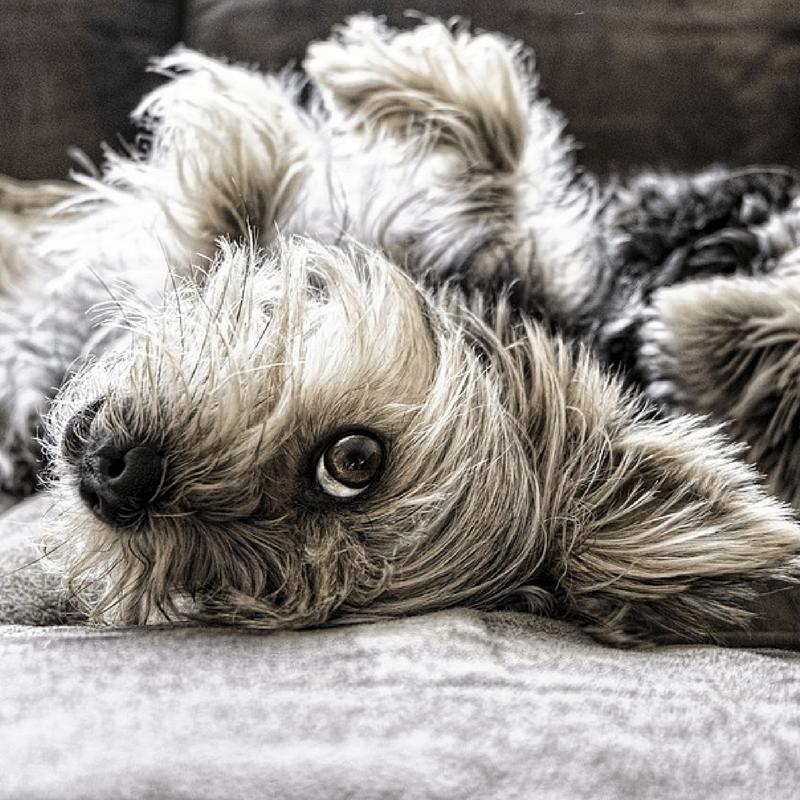 There is that overused adage that often truth is stranger than fiction. Well, that certainly is true for some of these bizarre animal laws. From bizarre dog to cat, to combined pet and other animal laws – you’ll certainly say huh?! at least once during this blog.

#1 In Turin Italy, dog owners are forced by law to walk their dogs, three times a day or they get stiffed with a hefty fine. Well, that is a great way to get out there and explore…and avoid that R8200 fine. 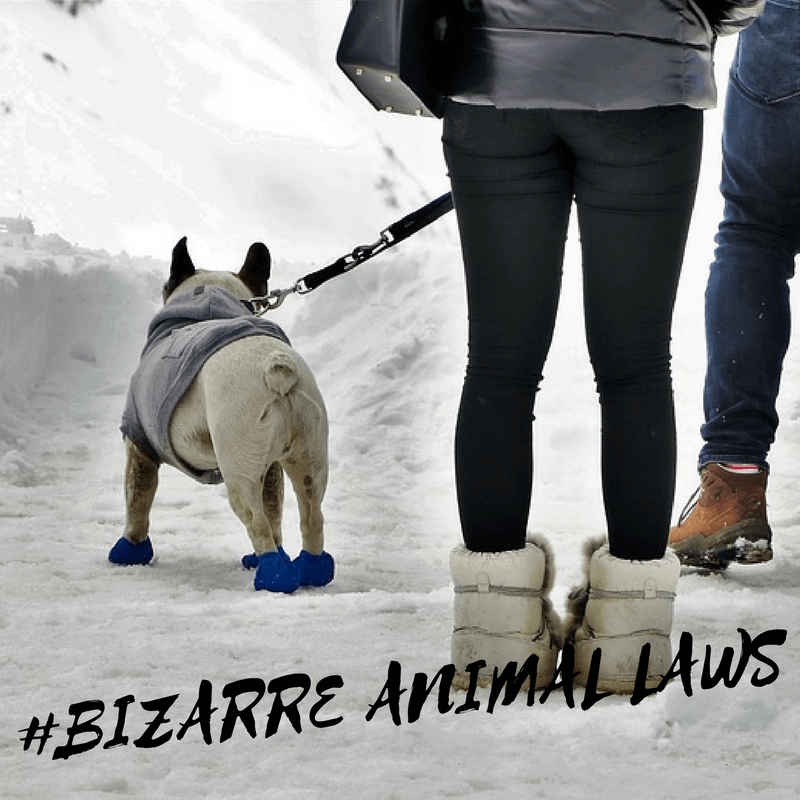 #2 In Switzerland, people are required to pass written and verbal tests before they are allowed to own a dog. In addition, a practical training class is also required for first-time dog owners.

#3 Any dog brought into Switzerland is required to be taken to a vet within ten days of his or her arrival and it is compulsory to have dogs micro-chipped and registered with the Animal Identity Service in Bern.

#4 In Iceland, for many years dogs were banned from the borders of Reykjavik due to failed poop-scooping laws.

#5 In Sweden, dogs attending a doggy-day-care centre must by law be able to see outside a sunny window. Because a dog is allowed to dream. 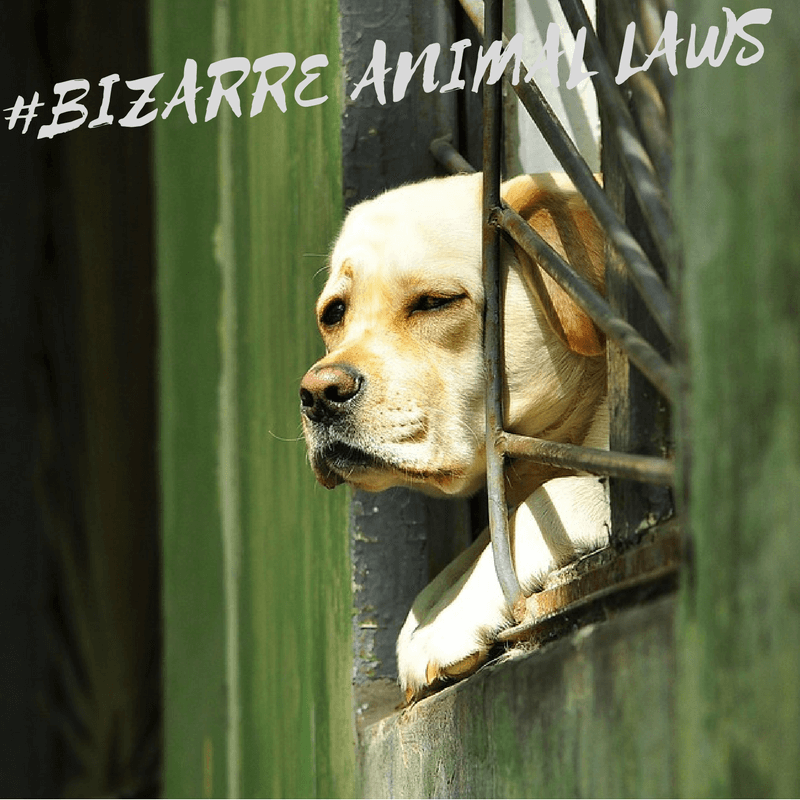 #6 In Saudi Arabia, men are prevented by law from walking dogs. In fact, dogs are almost completely barred, with the exclusion of working dogs. Only guard, hunting, and service dogs are permitted.

#7 In China, a law was passed in 2006 that restricts a household to one dog and the dog must be under 35.5 cm tall. This limits the type of breeds as naturally many varieties are bigger than just over a ruler in height. 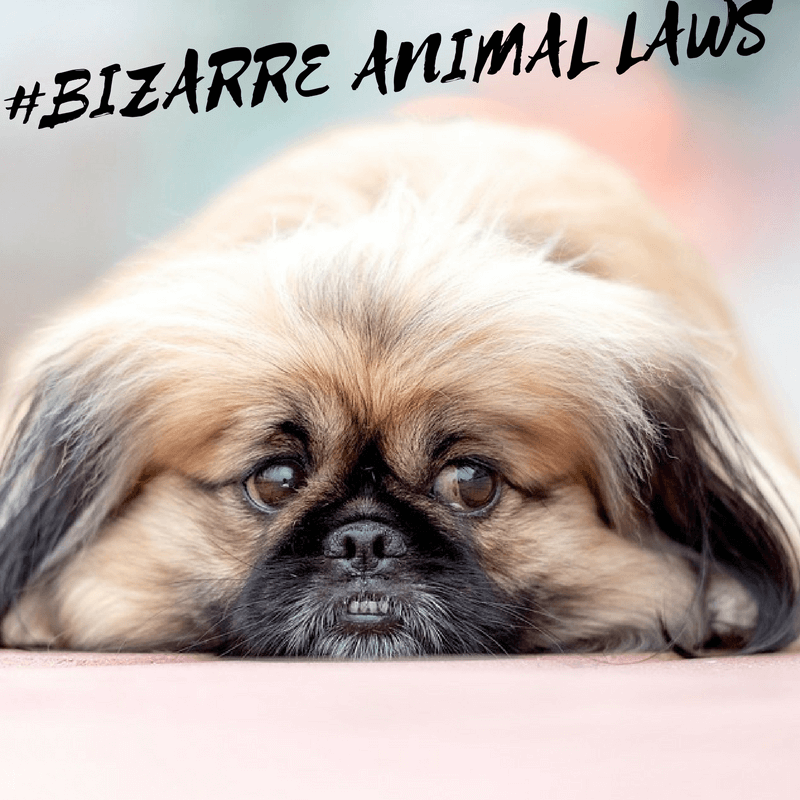 #8 In Germany, small dogs are becoming ever more popular due to a loophole in German tax law. This loophole permits any dog under 4.5 kg to be taxed at the same rate as a rodent (a third of the rate). Yes, that means in Germany people pay a monthly pet tax! And we complain about taxes!

#9 In UK, it’s illegal for a taxi in London to transport dogs with rabies. What a bizarre law! 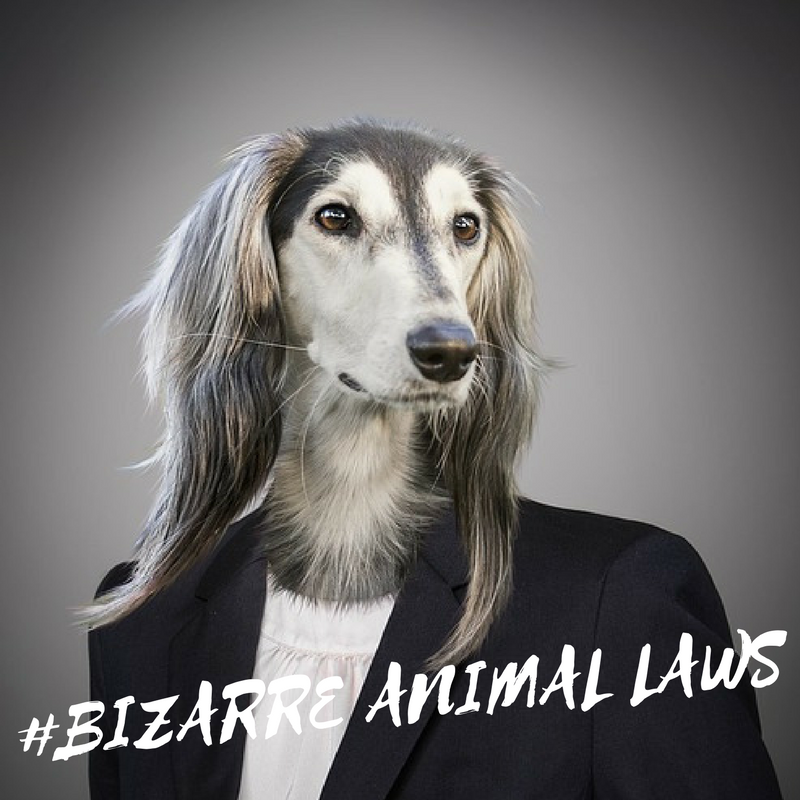 #10 On the Lancashire Coast (England), if a police officer asks you not to, you are not allowed to incite a dog to bark. Le whaaaaat?

#11 In Ohio, cops in Paulding County can bite a dog to calm them down. Can’t imagine that this would legitimately work. But hey! 😊

#12 In Oklahoma, people are forbidden from pulling ugly faces at dogs and can face a fine or even jail time. Hear, hear Oklahoma! Hear, hear!

#13 In Alaska, it is illegal to tie a dog to the roof of your car. Well, you’d think that that is common sense. No? 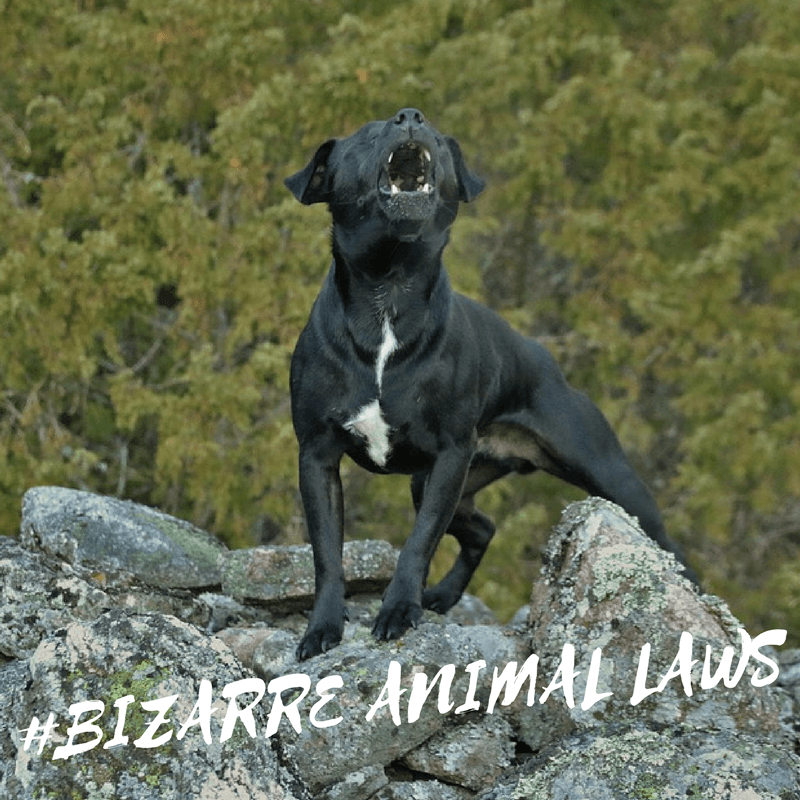 #14 In Little Rock Arkansas, dogs are banned from barking after 6 pm. Neighbours must love each other there!

#15 In Oklahoma, dogs are not allowed to gather in groups of three on private property, unless owners have a permit from the mayor. Mmmm… paranoid much about pooch conspiracies… 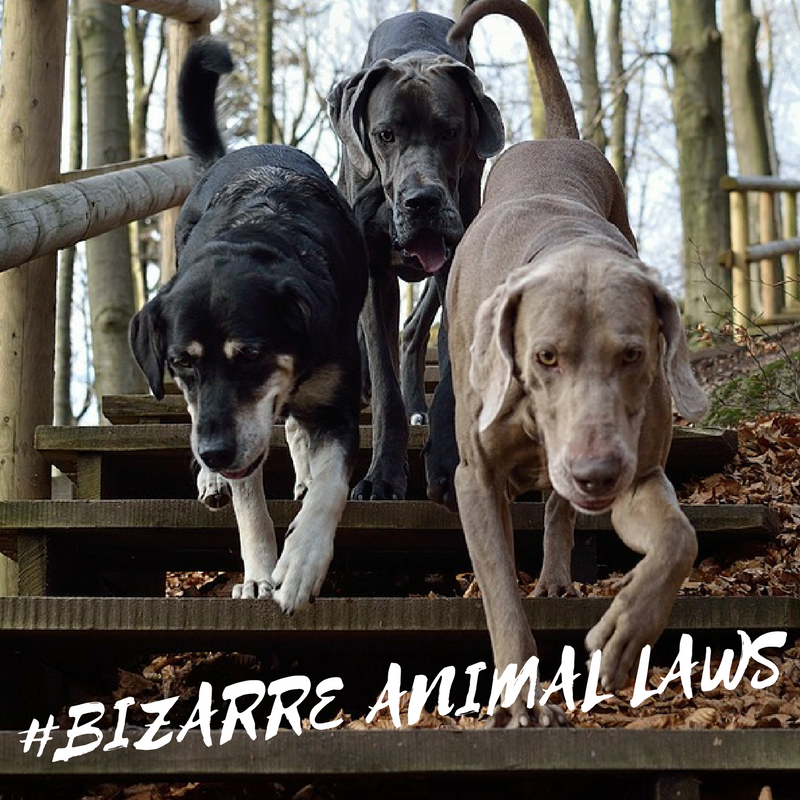 #16 In Idaho, it is illegal to take refuge in a dog kennel; which is great because it would be creepy if people crawled out of kennels randomly. So much for hubbies being in the doghouse…

#17 In Illinois, you are not allowed to give a lit cigar or whiskey to a dog – it’s illegal. Well, you’d certainly hope so. There must have been something in the media that sparked this…

#18 In Connecticut, dogs with tattoos must be reported to authorities. Surprisingly, tattoos are common amongst pet owners, as they make dogs more identifiable if they get lost. 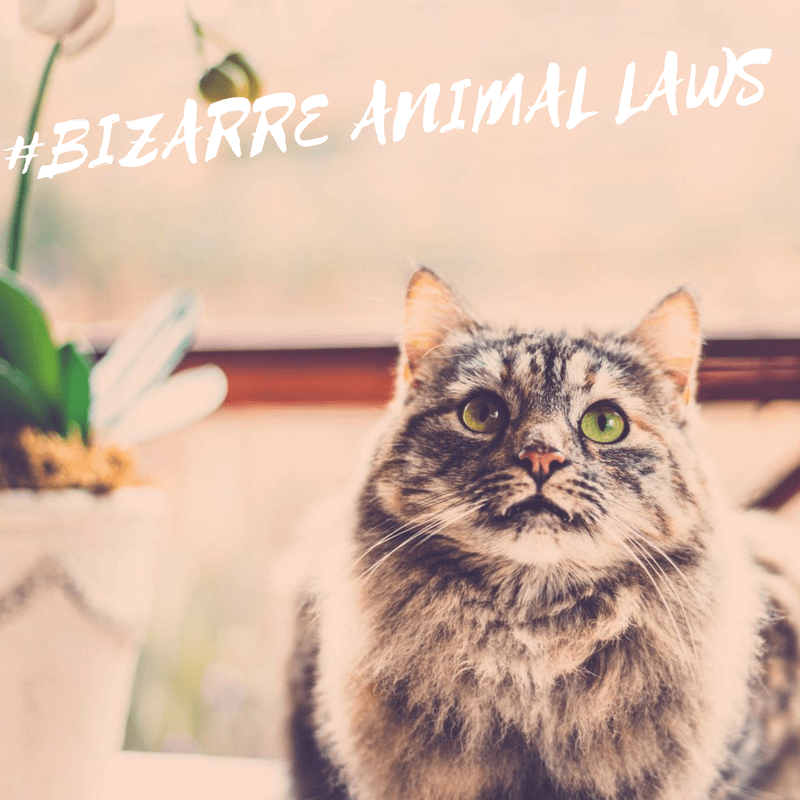 #19 In Hungary since 2001, cats in Lorinc can only be taken outside and on the street, if they are on a lead.

#20 In Sterling Colorado, cats cannot go outside at night without a taillight. Best of luck to those owners trying to attach those lights. But at least this will make their kitties more visible to motorists. 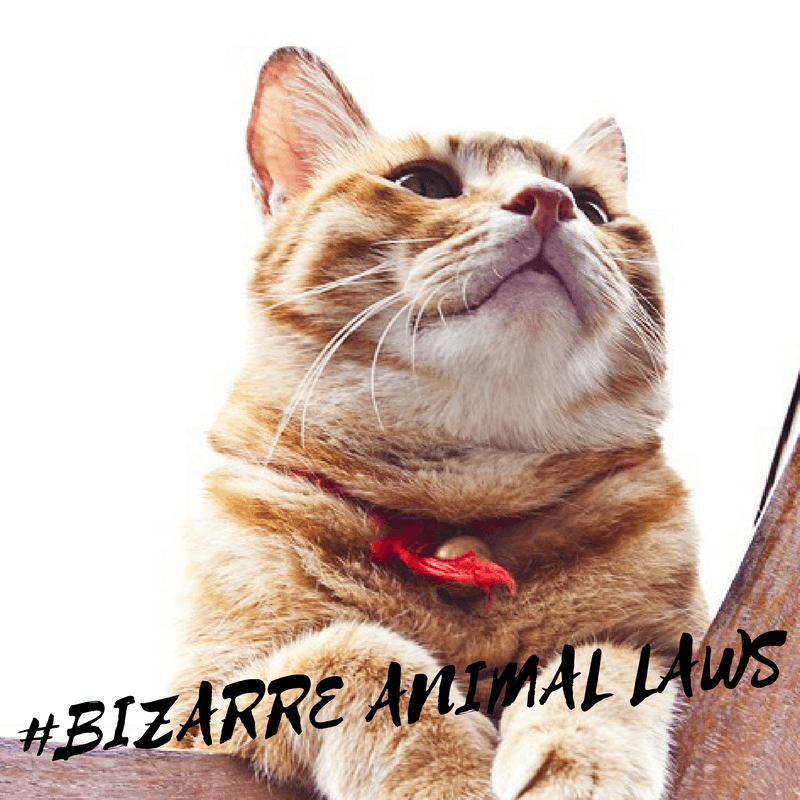 #21 In Longbern New Zealand, a cat is prohibited from leaving the house unless it has three bells around its neck. One wonders – why three?

#22 In Japan, officials created a curfew for the public display of cats. No cats may be displayed after 8 pm. How proper! 😊 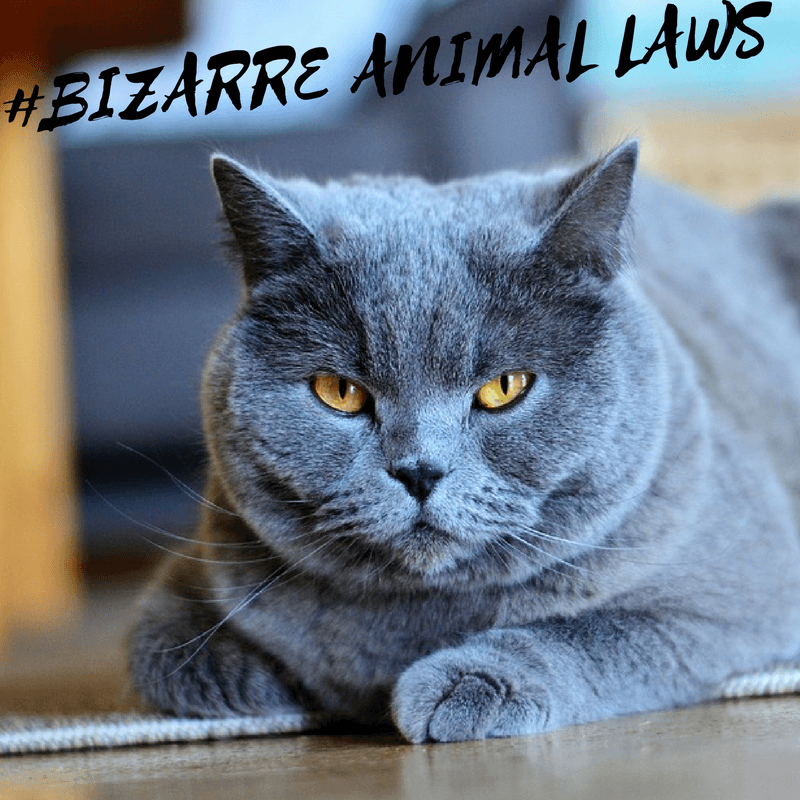 #23 In Indiana (USA), black cats of French Lick Springs must wear bells on Friday the 13th. 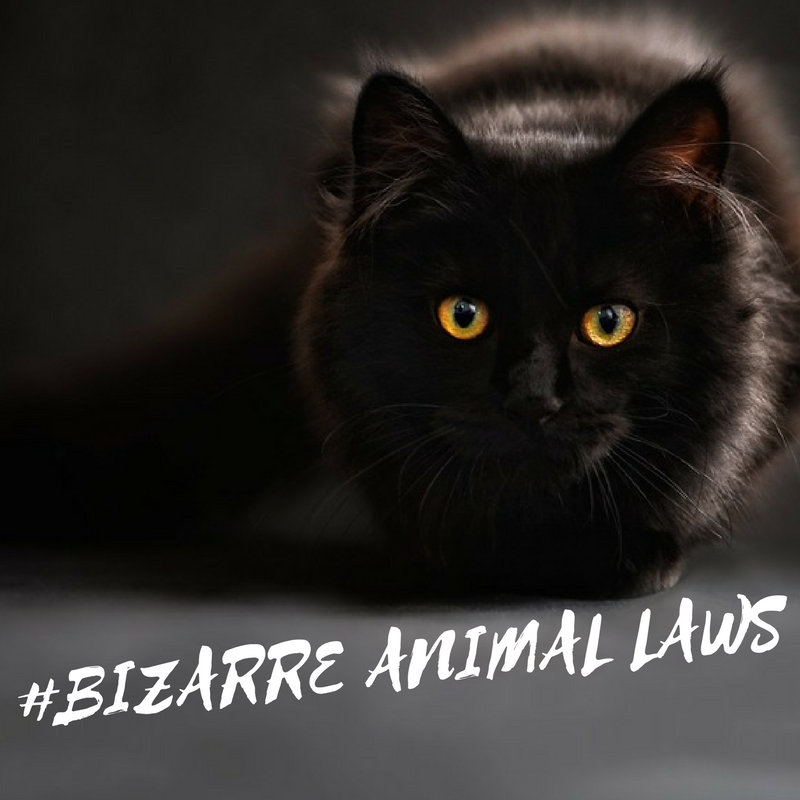 #24 In Switzerland, pets by law must have a companion animal. What a super law!

#25 In Miami Florida, it’s illegal to imitate an animal. Animals shouldn’t be taunted. Good for them!

#26 In California, it’s against the law for animals to mate 500 metres from a school, or church. MMMMmm…wonder who enforces this … 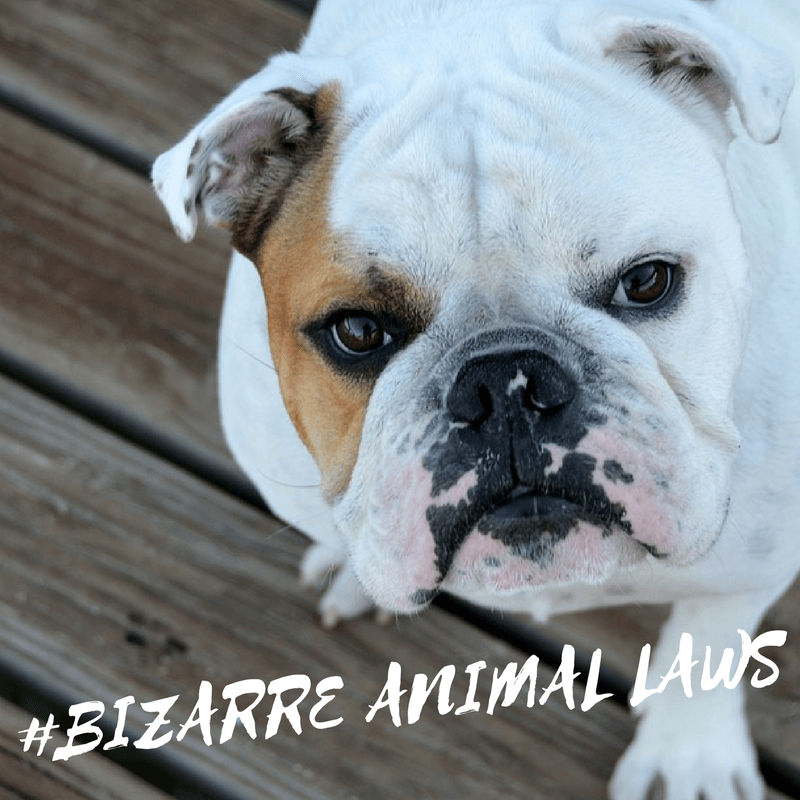 #27 In Virginia, it’s legal to prepare supper or any meals from the remains of road kill. And that counts for any animal hit by vehicles – domestic or wild. Nee sies!

#28 In UK, it’s illegal for your pet to mate with a pet from the Royal household. So, don’t sneak your chihuahua into Kensington Palace – those corgis are off-limits.

#29 In Australia, you are not allowed to name an animal unless you are planning to keep it as a pet. So basically, if you are going to eat it or intend to sell it to someone else to eat or kill it – it’s not allowed to have a name.

#30 In Norway, only male cats and dogs are neutered – the females are spared by law. 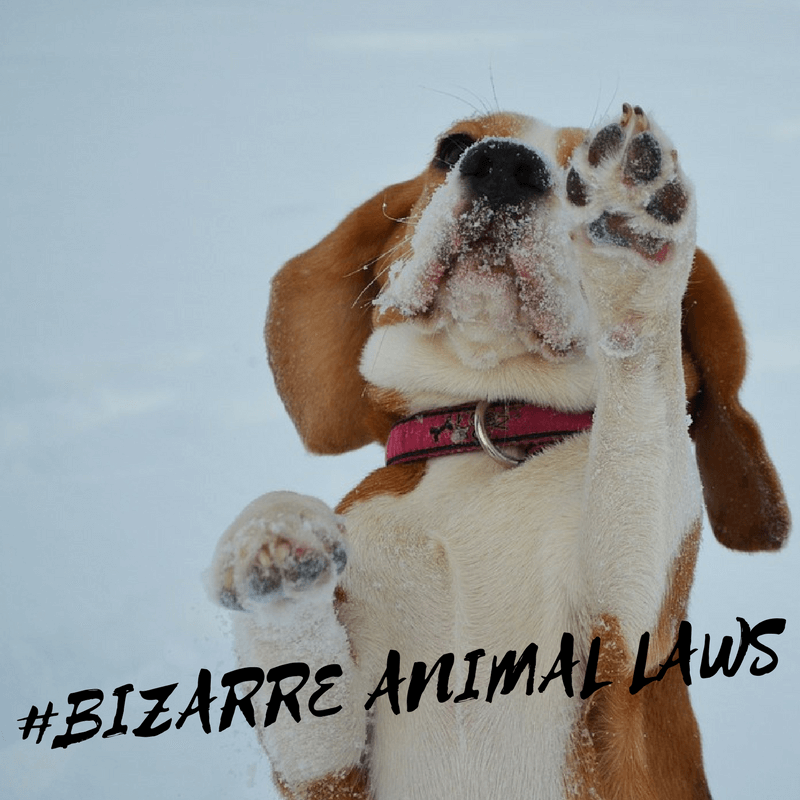 #31 In Australia, citizens are not allowed to drive in a public space with a dog or animal attached to their car/vehicle. Whhhaaaaaat? Outrageous.

#32 In Michigan (Reed City), animal lovers must choose between owning cats or birds, because they are not allowed to own both. No Sylvester and Tweetie vibes then. 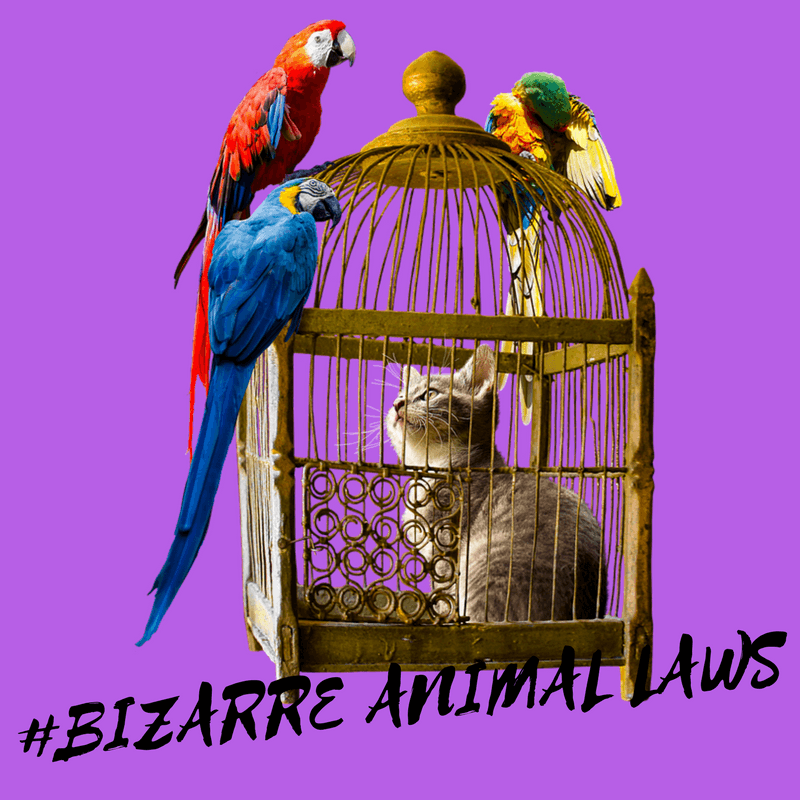 #33 In Minnesota (USA), cats are not allowed to chase dogs up telephone poles. But the other way around is fine, which seems totes unfair.

#34 North Carolina (Barber), cats and dogs are forbidden from fighting. This is further enforced because it is illegal to own both a cat and a dog at the same time. 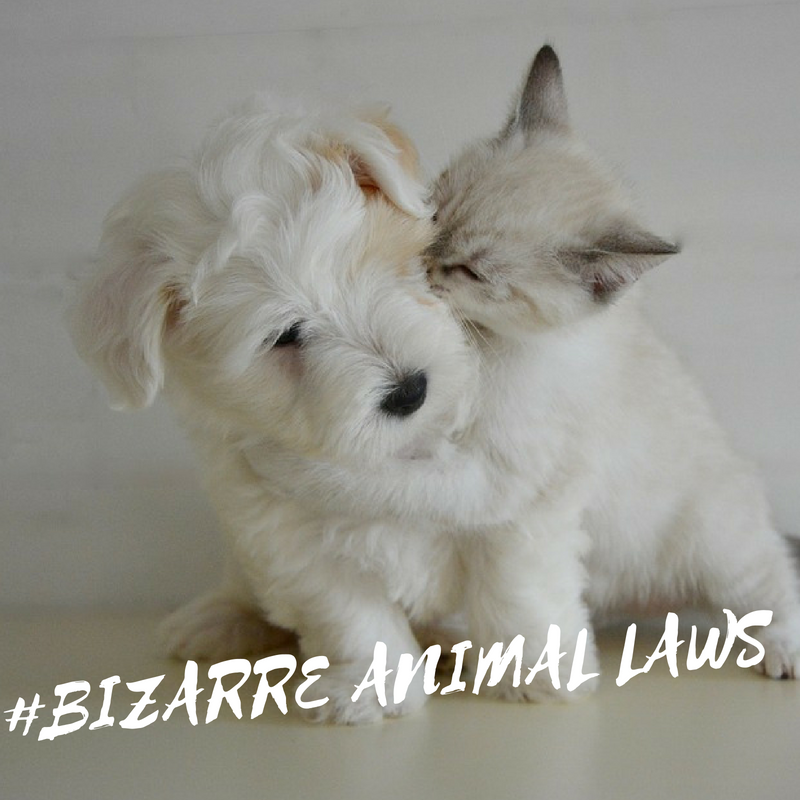 A FEW OTHER BIZARRE ANIMAL LAWS

#35 In South Dakota, you are only permitted to blow your nose indoors. Why? This law was created to prevent horses from spooking from the sound. And all horse riders – totally get this!

#36 In Alaska, it is illegal to wake up a bear for a selfie or photo. Bizarre.😊

#37 In Rome, a law was passed in 2005 that banned goldfish bowls as it was deemed cruel to keep goldfish as pets.

#38 In Wyoming, during the months of January and April, it’s illegal to photograph rabbits unless you have authorisation and a permit. No bunny selfies then – well, without a permit. 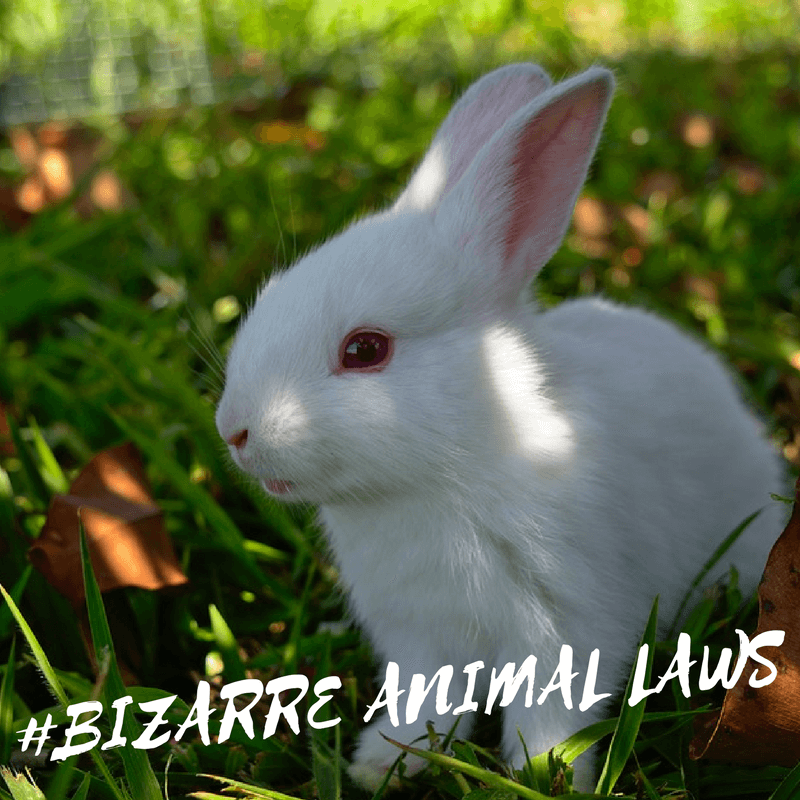 #39 In France, pig owners are forbidden from calling their swine Napoleon – out of respect for the notorious Napoleon Bonaparte. 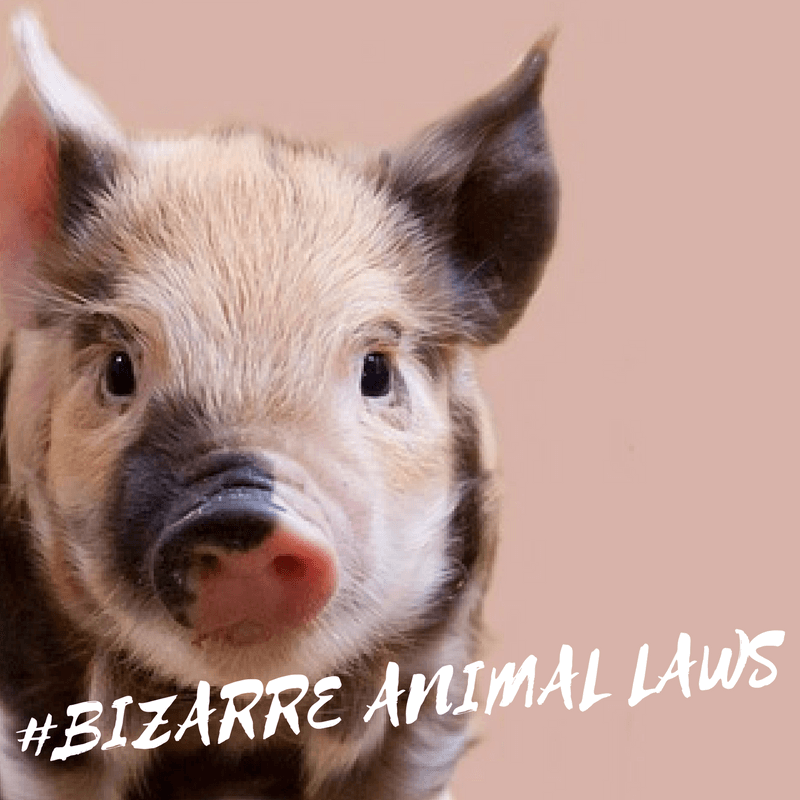 #40 In Georgia (USA), it is illegal to give a goldfish away as a prize to bingo players. There must be a horrific “sushi“ story behind this one…

#41 In Berkeley California, if your parrot flies away, by law you can’t whistle to attract it back before 7 am. How many parrots flew away, disturbing the peace that this became law? 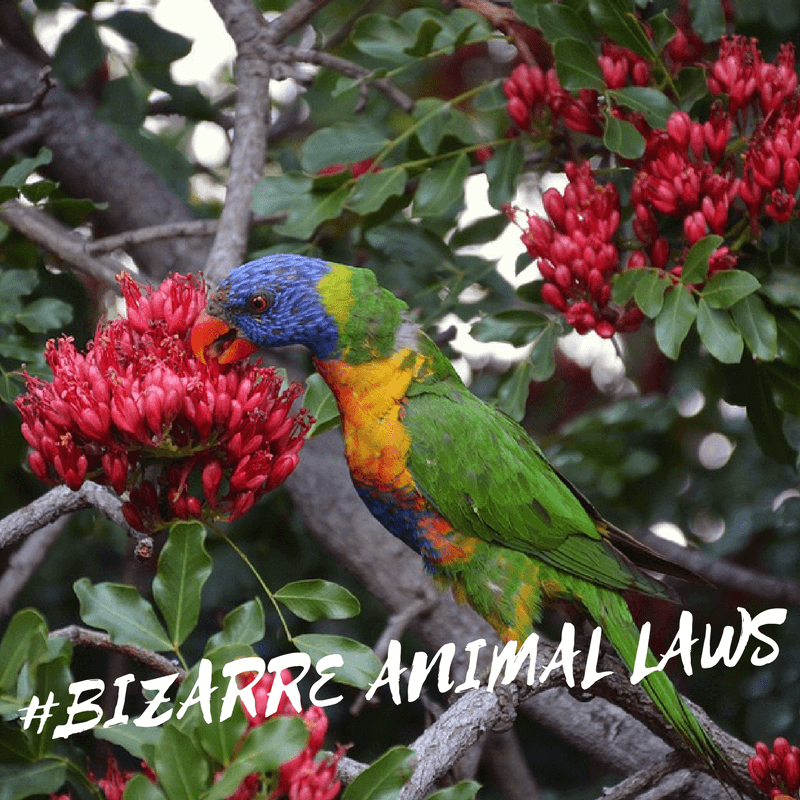 JUST BIZARRE! You can only wonder what the tales behind the “tails” are.

Bitrebels.com  I  Rover.com  I  Dogtime.com

A little bit about Sparkle Ellie:

Sparkle Ellie is a South African three-in-one-blog that launched in September 2017, with a mission to bring more love, positivity and (sparkles-crossed) interesting blogs to the South African public. Sparkles, love, protection of animals and yummy food is published weekly for all South Africans (and beyond) to enjoy.

MEET THE TEAM BEHIND THE SPARKLE PAWS AND GLITTER TRAILS

One thought on “41 BIZARRE ANIMAL LAWS OF THE WORLD”